You are here: Home / Winding Up Applications 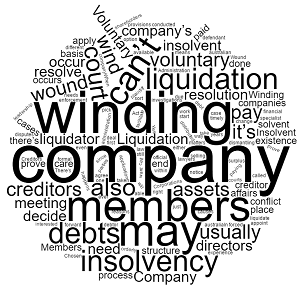 Winding up company in insolvency may be the only option available to you, either as:

When you wind up a company’s financial matters to facilitate an orderly dismantling of the company’s structure, this is called liquidation.

This occurs because the company is presumed to be insolvent (can’t pay debts) or the company members want to end the existence of the company.

When the company members have a resolution it’s called voluntary liquidation. This means that it’s not forced by the courts on the company, but that the members decide that it should go forward on their own.

Making a winding up application may be the only way to recover your debts from an insolvent company.  Our dedicated lawyers can offer advice and assistance in the winding up procedure.

GET A FREE FEE ESTIMATE NOW

The Most Common Reason for Winding Up

One of the most common reasons that we attempt to wind-up a debtor company in liquidation is failure of the company to follow the directions on a statutory demand.

Then, while the company is presumed to be insolvent, the creditor can apply to the Federal Court or Supreme Court to wind the company up in liquidation.

There are a number of other steps that have to be taken:

Why is Winding Up Chosen?

The only way to take care of the affairs of a company and end the existence of the company is through the insolvency process.

This is different than just paying the debts and selling the assets of the company because the structure of the company would still be in place in this case.

How is an Insolvent Company Wound Up?

When a voluntary insolvency occurs, the members have a resolution and the company’s affairs are taken care of.

There is usually a meeting of the members or through a notice of resolution where there’s no need for any formal meeting.

If the members decide to wind up the company, they pick a liquidator. Creditors may have a right to change any liquidator at any first meeting of the creditors.

The Voluntary Administration provisions of the Corporations Act may also start a voluntary liquidation. The members may resolve to place the company into administration, then the creditors will resolve for a liquidation to occur.

Winding up a Company in Liquidation

The court may also wind up a company. This is usually done when one or more creditors apply for an order in the Federal Court or Supreme Court to wind up the debtor company.

The creditor needs to prove to the court that the company can’t pay debts and is insolvent.

Members such as directors or shareholders of the company may also need to prove insolvency to the court if there are any disputes or it may occur for other reasons. Once it’s wound up by the court it’s official.

How to Prove That A Company Is Insolvent

In most cases a company is wound up on a voluntary basis since it can’t pay debts.

If a company can’t pay debts once they are due even if there are assets in surplus, but the company can’t liquidate those assets on a timely basis this causes an insolvency.

The directors of the company usually decide that the company is insolvent because debts that need to be paid can’t be paid for.

Are solvent companies ever wound up?

Yes, in some cases solvent companies are wound up.

This is done by the members through a Members Voluntary Winding Up. The court may also do this if members or directors apply for an application for this to occur.

It usually happens when there’s some sort of conflict within the leadership of the company and the interested parties can’t resolve that conflict. The company may also not be able to agree to appoint a liquidator to deal with the wind up.

If you suspect that a company is insolvent then it is important to act quickly.

The debtor company may be attempting to transfer assets out of the company or take steps to defeat creditors.

Further, if the debtor is deemed to be trading insolvent then the liquidator may be able to realise the personal assets of the director(s) of the debtor company.

Stonegate Legal are commercial litigation, debt recovery and insolvency solicitors.  If a debtor company owes you money and can not pay, then they may be insolvent. Contact us today for a free chat about your matter.

Making a winding up application may be the only way to recover your debts from an insolvent company.  Our dedicated lawyers can offer advice and assistance in the winding up procedure.