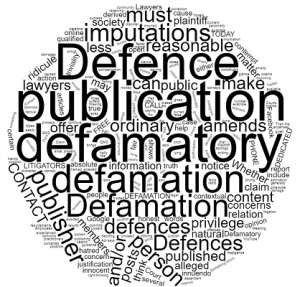 If you have had defamatory content published about you which has caused damage to your personal or business reputation, then you may be entitled to claim damages.

Defamation is the publication of a false factual statement which harms the reputation of a person or small business.

This statement is published with either negligence or malice.

To bring a civil litigation action for defamation as a company, the company must have fewer than 10 employees, or must be against a natural person, and must satisfy three (3) requirements:

The publication is defamatory if it:

An action for defamation is easily made out in most cases, but success is largely dependent on several available defences open to a defendant.

Whether you are the publisher of alleged defamatory content, or you are have been defamed by a publication, our dedicated defamation lawyers can help you.

There are several possible defences open to the defendant:

As well a there being a publication, the publication must contain defamatory imputations.

An imputation is a claim contained in the publication that the person has done something undesirable, or is an accusation of some sort.

For the published imputation to be defamatory it must cause ordinary, reasonable people in society to think less of the person/business.

The Courts have given guidance in relation to deciding what constitutes defamatory content.  They include:

In the present case it is alleged by the Plaintiff that the ordinary and natural meaning of the words “June turned out to be a thieving, lying, money crazed bitch who screwed me out of nearly 3 million rand – may she rot in Hell” was that she was a person that: i. is of bad character; ii. commits criminal offences; iii. cannot be trusted; and iv. suffers from a mental disorder.

Defences to a Defamation Claim

There are a number of defences to a claim for defamation, namely:

There is a long and varied case law in relation to the defences for defamation.

Contact our defamation lawyers for more information in relation to defences to defamation claims.

Part 3 of the Defamation Act allows the publisher of the defamatory imputations to make amends.

The process in the Defamation Act says:

The concerns notice must be in writing and informs the publisher of the defamatory imputations.

Then the publisher can offer to make amends by:

If the offer to make amends is accepted then the matter cannot continue to trial.

If the offer to make amends is not accepted, then the matter may proceed to Court for a decision.

Whether you are the publisher of alleged defamatory content, or you are have been defamed by a publication, our dedicated defamation lawyers can help you.