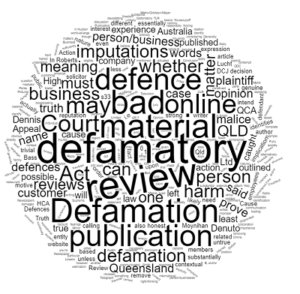 This article is about defamation & bad online reviews.

Being on the receiving end of bad online reviews can have a devastating impact on your business.  If those reviews are untrue, or parts of the review are untrue then you may have a case in defamation.

Generally, a website such as Yelp, Google or any of the other big international sites will not act as a mediator unless you have a Court order or something of that nature.  In fact, you’re lucky if you could even get to speak with somebody.

Defamation laws in Australia can remove the need to contact the website directly and may apply to bad online reviews forcing the reviewer to remove the review or face being sued for damages.

In this article our defamation lawyers explain the basics in removing bad online reviews.

Contents Show
Do You Have a Cause of Action?
Publication of a Bad Review
Must Identify Your Business
It must be Defamatory
Does this Apply to you?
Defences to a Cause of Action for Defamation in an Online Review
Defamation or Truth
Contextual Truth
Honest Opinion
Triviality
Malice as a Reply to Possible Defences

Do You Have a Cause of Action?

If you have been left a bad review for your business then the trading entity must be either a person (i.e. sole trader); or a corporate entity (i.e. a company) if it employs fewer than 10 persons and is not related to another corporation.

Publication of a Bad Review

There has to be a publication.  This publication can be as an online review and must be communicated to at least one other person.  In the context of a bad online review, this communication is essentially to the world-at-large, or anyone who searches online where that review is likely to appear.

Must Identify Your Business

The defamatory comment must identify your business.  This identification can be in the form of an explicit naming of your business, or if not named, then may be inferred upon the words of the defamatory material.  However, in the case of an online review, it is more likely than not that it will name your business explicitly.

It must be Defamatory

This may sound obvious, however unless you understand what “defamatory” means at law, it is a hard question to answer.  The publication is defamatory if it:

Does this Apply to you?

If you are a person, or a company with less than 10 employees; and the defamatory material was published to at least one other person; and it identifies you (by name or strong implication); and the material was actually defamatory; then you may have a cause of action for defamation pursuant to possible defences outlined below.

The Defamation Act 2005 (QLD) at s3 and the case law try to strike a balance between defamation and freedom of expression and, in particular, on the publication and discussion of matters of public interest and importance.

Because of this, most defamation action relies not on whether there has been a publication of defamatory material, but whether there is a genuine defence to that claim.  The possible defences in relation to the publication of an online review are inter alia outlined below:

It the Defamation Act 2005 (QLD) at s25 says that it is a defence to the publication of defamatory matter if the defendant proves that the defamatory imputations carried by the matter of which the plaintiff complains are substantially true, or essentially true in substance or not materially different from the truth.

For example, if a customer to your restaurant had a bad experience, and they can prove the bad experience, then this may be a complete defence if they recount that bad experience in a bad online review.  This has been followed in a recent Queensland Court of Appeal decision in Hudson v Mellis [2016] QCA 171.

having regard to the nature of that truth, that is that you’re a fraudster, there could be no further harm done by also broadcasting that you were a tax cheat.

The Defamation Act 2005 (QLD) at s31 says that it is a defence to the publication of defamatory material if:

It is important to note that a defence of honest opinion requires all three elements outlined above.

Words are often capable of more than one meaning, and because the jury may attach to them a defamatory meaning which the writer did not intend, it does not follow that the writer did not honestly believe in the truth of what he wrote and reasonably intended a different meaning to be given to his language.

Malice as a Reply to Possible Defences

There is a reply to some of the defences mentioned above if a person/business can prove that the customer left a review with malice.

In order to establish malice, the person/business must prove that, in publishing the material complained of, the customer was actuated by a motive that was foreign, or ulterior, to the matter which has been used as a defence.  In Roberts v Bass (2002) 212 CLR 1, 30–31 the High Court said:

in considering whether the plaintiff has proved malice, it is necessary that the plaintiff not only prove that an improper motive existed but that it was the dominant reason for the publication

Defamation is a complex area of the common law of Australia and will need to be based upon the facts in each individual case.

You may have a genuine cause of action for defamation.

Advancement and Cummins (A Bankrupt) v Cummins
Next Post: Liquidated Damages and Penalties

Darren Herbert
22:08 13 Apr 22
The entire team at Stonegate Legal have been exceptional to deal with making a difficult situation so much easier to deal with,very pleasant and efficient, I highly recommend them.

Alex Luigi
09:03 21 Dec 21
We are from Wollongong NSW, a few local lawyers told us not to bother with our case. Not only did Wayne and Nicola take on our case, but they said our contract had an unfair clause according to ACL. Wayne and Nicola helped us prepare all the documentation and evidence for our NCAT hearings. We won our case, receiving our monies paid towards a wedding in Bali that could not be delivered due to COVID-19 International Travel Restrictions. Before engaging Wayne I did not know what a Force Majeure clause was and that ours was unfair! Wayne and Nicola thanks a million couldn't have done it without you! We got married last week in Bowral NSW. Thanks to Stonegate Legal we were not out of pocket!

sarah kalisimeras
01:58 02 Dec 21
Thank you, Wayne, and all at Stonegate Legal for all your help.Wayne was able to achieve a successful outcome for us in the end.Unlike many other lawyers he would respond as quickly as possible to all questions and queries we had, and we were never made to feel like we were an inconvenience or that our questions or queries weren’t valid. He would explain everything thoroughly to make sure we were aware of what was going on.Even being from interstate and never actually meeting Wayne face to face we would highly recommend him and his firm to anyone due to how honest and up-front Wayne has always been.He is a man true to his word.

Simon Mangion
01:09 20 Sep 21
Nicola is very knowledgeable. I found Nicola to be very helpful from the first contact I had with her. Nicola sorted out our legal issue with no fuss and I wouldn't hesitate to use her again. Thanks Nicola

Thomas Sparks
06:13 01 Sep 21
Been using Wayne for a while now and highly recommend for all commercial matters. Great guy and great company!

Hayley
20:42 12 Feb 20
Thankyou to Wayne for representing us with a judgement debt&dispute with a neighbour via. QCAT.With his experience, professional support and guidance he helped us work through a very stressful time.With Gratitude.Hayley.

Julie Tibbles
07:40 30 Jul 19
Thanks to Wayne and the team for helping me collect my outstanding debts. You were easy to understand, easy to deal with and you really know your stuff. Thanks again.