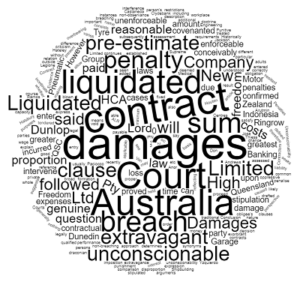 Liquidated damages are a fixed amount of money, established at the formation of the contract, usually due and payable upon breach, as a reasonable pre-estimate of costs and expenses incurred by the non-breaching party.

However, these liquidated damages are not to be a penalty for the breach.

In commercial litigation or civil litigation, if a Court determines that the clause seeks to penalise the breaching party then it may be void and unenforceable.

It is important that these clauses are drafted correctly and are a genuine pre-estimate of the costs likely to be incurred because of the particular breach.

This article will explain the difference between liquidated damages and penalties.

It will be held to be penalty if the sum stipulated for is extravagant and unconscionable in amount in comparison with the greatest loss that could conceivably be proved to have followed from the breach. [sic].

This decision followed Lord Halsbury in Clydebank Engineering and Shipbuilding Co. Limited v Don Jose Ramos Yzquierdo y Castaneda. But how has this question been treated in Australia?

“Freedom of contract” is the freedom of persons to be able to enter into contracts without overbearing or draconian outside interference and restrictions. This is of course qualified by minimum wage laws, workplace relation laws etc. but on the whole, adults with capacity to enter into a legal contract, can do so.

In some instances, the Courts are hesitant to intervene in person’s freedom to contract. There has been criticism of the doctrine of penalties. The arguments from a freedom of contract perspective is that if the parties legally entered into the contract, including a liquidated damages clause, then that should be enforceable and the Court should have nothing to say.

However, generally common law contract law does not allow:

It is therefore proper to proceed on the basis that Dunlop Pneumatic Tyre Company, Limited v New Garage And Motor Company Limited continues to express the law applicable in [Australia].

This means that in Australia a sum for liquidated damages is a penalty if it is:

The Court also added that a sum for liquidated damages is not enforceable if it is “out of all proportion”.

the question of extravagance and unconscionability by reference, as Lord Dunedin said in Dunlop, to the greatest loss that could conceivably be proved to have followed from the breach, is to be understood as reflecting the obligee’s interest in the due performance of the obligation.

The … description of the disproportion varies in expression in the cases, but for present purposes “extravagant”, “exorbitant”, “oppressive”, “inordinate” and “unconscionable” can be seen to be broad synonyms: see Ringrow at 667-669. The question is to be assessed as at the time of entry into the contract.

A liquidated damages clause will only be unenforceable if the clause is deemed to be:

If you have a liquidated damages clause in your contract which is a reasonable pre-estimate of the damages caused; or expenses paid as a result of a breach, and not extravagant, unconscionable or blown out of all proportion – these is a good chance that the Court will not intervene.

Evidence of all reasonable costs should be tendered in order to satisfy these requirements.

Darren Herbert
22:08 13 Apr 22
The entire team at Stonegate Legal have been exceptional to deal with making a difficult situation so much easier to deal with,very pleasant and efficient, I highly recommend them.

Alex Luigi
09:03 21 Dec 21
We are from Wollongong NSW, a few local lawyers told us not to bother with our case. Not only did Wayne and Nicola take on our case, but they said our contract had an unfair clause according to ACL. Wayne and Nicola helped us prepare all the documentation and evidence for our NCAT hearings. We won our case, receiving our monies paid towards a wedding in Bali that could not be delivered due to COVID-19 International Travel Restrictions. Before engaging Wayne I did not know what a Force Majeure clause was and that ours was unfair! Wayne and Nicola thanks a million couldn't have done it without you! We got married last week in Bowral NSW. Thanks to Stonegate Legal we were not out of pocket!

sarah kalisimeras
01:58 02 Dec 21
Thank you, Wayne, and all at Stonegate Legal for all your help.Wayne was able to achieve a successful outcome for us in the end.Unlike many other lawyers he would respond as quickly as possible to all questions and queries we had, and we were never made to feel like we were an inconvenience or that our questions or queries weren’t valid. He would explain everything thoroughly to make sure we were aware of what was going on.Even being from interstate and never actually meeting Wayne face to face we would highly recommend him and his firm to anyone due to how honest and up-front Wayne has always been.He is a man true to his word.

Simon Mangion
01:09 20 Sep 21
Nicola is very knowledgeable. I found Nicola to be very helpful from the first contact I had with her. Nicola sorted out our legal issue with no fuss and I wouldn't hesitate to use her again. Thanks Nicola

Thomas Sparks
06:13 01 Sep 21
Been using Wayne for a while now and highly recommend for all commercial matters. Great guy and great company!

Hayley
20:42 12 Feb 20
Thankyou to Wayne for representing us with a judgement debt&dispute with a neighbour via. QCAT.With his experience, professional support and guidance he helped us work through a very stressful time.With Gratitude.Hayley.

Julie Tibbles
07:40 30 Jul 19
Thanks to Wayne and the team for helping me collect my outstanding debts. You were easy to understand, easy to deal with and you really know your stuff. Thanks again.