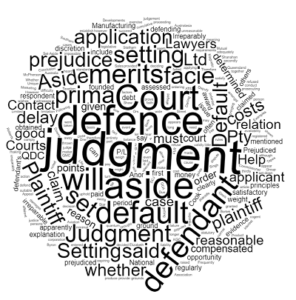 Do you setting aside a default judgment?

If you are thinking about setting aside a default judgment then you must persuade the Court of a number of things.

In order to succeed on this application, the first defendant must satisfy the Court first that it has given a satisfactory explanation for its failure to appear in the proceeding; secondly, that there has been no unreasonable delay by it in making this application; and thirdly, that it has a prima facie defence on the merits of the claim on which the judgment is founded.

They then went on to say:

The Courts, however, have laid down for themselves rules to guide them in the normal exercise of their discretion. One is that where the judgment was obtained regularly there must be an affidavit of merits, meaning that the applicant must produce to the Court evidence that he has a prima facie defence.

It is not often that a defendant who has an apparently good ground of defence would be refused the opportunity of defending … the issue whether the applicant defendant had a prima facie case on the merits “is the most cogent”.

To have judgement set aside, the defendant must establish that it has a prima facie defence on the merits to the claim on which the judgment was founded.

Frequently, persons have been let in to defend who have had little or no explanation for their delay but who have shown reasonable grounds of defence … a person who has an arguable defence and wishes to have it determined on the merits, will be heard by the court before judgment.

The cases seem to say that in the interest of justice, a Court may set aside a default judgment if the applicant can provide the Court with a reasonable defence.

In this case the Court determined, on the evidence, in relation to setting aside default judgment, that there was clearly a dispute as to the quantum of the debt, and as such, money had been paid to the Plaintiff. There was no prejudice to the Plaintiff to hear the defence on the merits and so the Court made an order setting aside the default judgment and ordering the respondent to pay the costs of the applicant of the application on the standard basis.

The plaintiffs have not alleged any prejudice, other than the cost of prosecuting their claim on liability, if the judgment is set aside. The claim is for damages which will need to be assessed. The costs thrown away by setting aside judgment would be minimal and can be compensated in part by a costs order.

In this case the judge assessed that there would be no prejudice that could not be compensated with an award of costs. Therefore, in this case the application was granted and the judgment obtained by default was set aside.

Examples where the Courts have decided that the Plaintiff would be prejudiced include a matter where the Plaintiff was very sick, legislative requirements would be impossible to comply with; availability of witnesses might prove a difficulty so long after an event; the statutory limitation period is close to expiring; and the potential respondent corporation is no longer registered.

Following how the Courts have determined this issue, it appears that the Courts will allow a defence to be brought, even if there is not a satisfactory reason for the delay, provided that the defence is a reasonable prima facie defence.

On balance, a court will weigh up the factors mentioned above amongst others, and make a decision. Is there a reasonable reason for the delay? If not, is there a prima facie defence on the merits? If so, will the setting aside of the default judgment cause irreparable prejudice to the Plaintiff?

It is clear applying the principles in Cook v D A Manufacturing Co that a Court has a very wide discretion in deciding if it will uphold an application and set aside a default judgment. 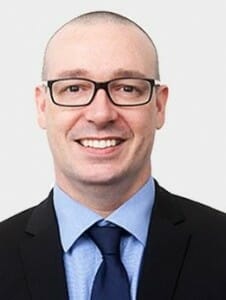 Bankruptcy – What is it?
Next Post: ﻿Rebutting the Presumption of Insolvency